10 Athens Food You Must Try

10 Athens Food You Must Try

What are the best 10 Athens Food to try?

Saturated in rich history and gifted with the Aegean Sea, Greece has one of the best cuisines in the world. This Mediterranean treasure has an abundance of delicious meals including fresh seafood, juicy meat and non-preservative vegetables. Some of the reasons behind having such a unique combination of mouth-watering tastes are centuries-long traditions and Eastern and Western cultures, all combined in delicious tastes of Greek foods nowadays. During your visit to Athens, try to avoid typical tourist traps and opt for Greek cuisine restaurants, or choose to participate in some of the amazing food tours in Athens. Don’t let the names of the Greek dishes intimidate you, we are here to break them down, with our list of the top 10 Greek foods to try in Athens!

So, folks, get comfortable, relax and let your imagination fly to the Greek capital while we share with you the top 10 foods in Athens you have to try. Besides being the metropolis, Athens is also the capital of the Greek culinary scene and trust us when we say, Greek food never disappoints. From high class gourmet restaurants, to top notch street food vendors, and food tours that will unveil you unique traditional tastes in Athens, this marvelous city simply has it all! Ready, steady and go, let the food journey begin!


The number of unique greek dips play a crucial role in Greek gastronomy since they are an inevitable addition to all meals and appetizers. We advise you not to leave Athens without getting a chance to try tzatziki, melitzanosalata or taramasalata and witness their power to enhance the taste of every dish. Globally known tzatziki is made from Greek strained yogurt, cucumber, fresh herbs, olive oil and lemon juice. Another simple, yet a real punch of flavor is melitzanosalata made from roasted eggplant, garlic, oil, and lemon juice. They perfectly match together with pita, meat, vegetables or just with a spoon by themselves. On the other hand, spectacular taramasalata which the main ingredient is roe of the cod (fish eggs) is a real must-taste of Athens food offerings. 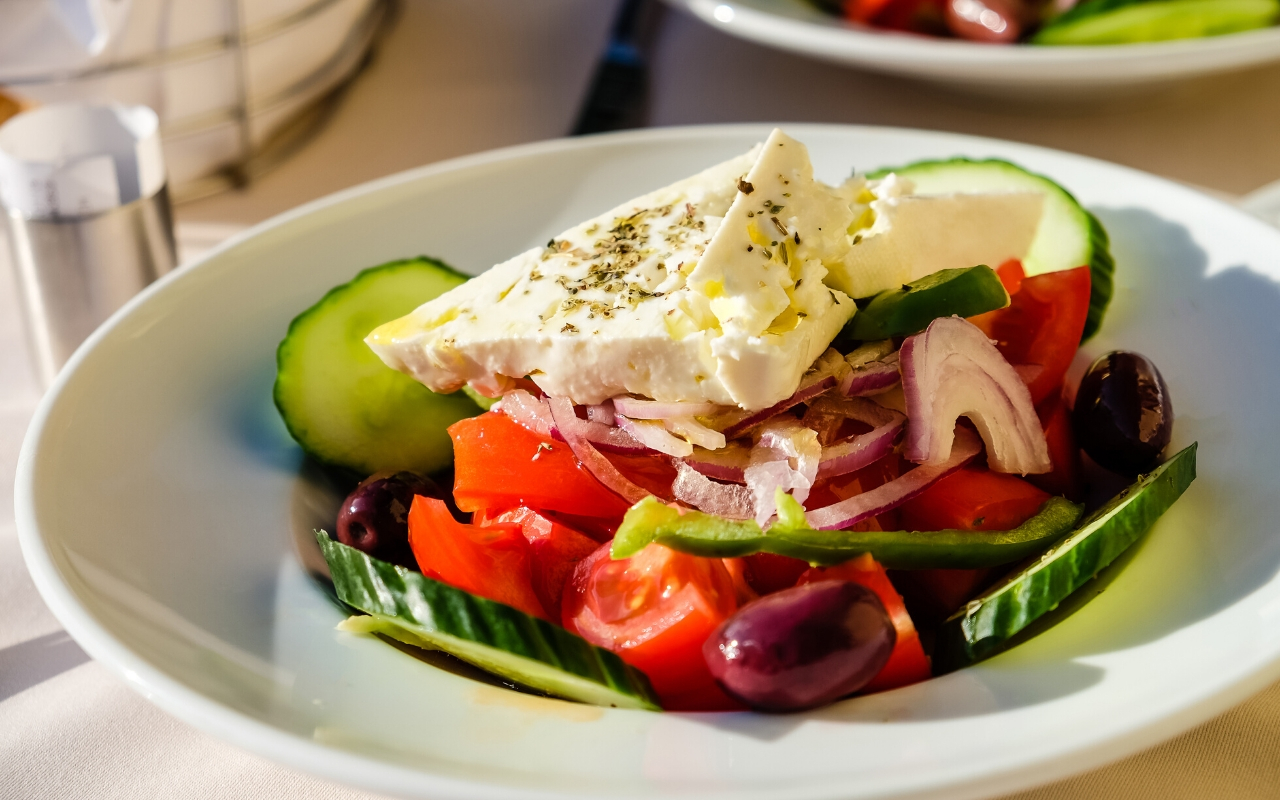 It doesn’t get more Greek than a traditional Greek salad! Indulge in this healthy salad during your trip to Athens and thank us later! Juicy red tomatoes, fresh cucumbers, sprinkled with Greek olives, feta cheese, salt, pepper and oregano, and finally topped with extra virgin Greek olive oil! The Greek salad made it to our list of the top foods to try in Athens, and we hope it’ll make it to your list as well!

And in case that you would like to taste the vegan version of Greek salad and many more traditional dishes, say no more! Join our Vegan Food Tour and uncover the best vegan food in Athens while admiring the Acropolis and strolling around the vivacious Plaka neighborhood. Satisfy both your savory side and sweet tooth with flavorful Greek vegan tastes and indulge in the most delightful vegan food tour in Athens!


One of the starters that is going to win your hearts are courgette balls. These perfect Greek meze balls have a crusty crust but rich and creamy texture on the inside. The optimum balance between tasty feta cheese and fresh mint will leave you speechless. Pair it with some Greek dip and get an ideal combination of yummy Greek foods. You can either eat it as an appetizer or combine it with the main meal. But, hey, who says that snacks are a bad thing? Hence, if you would like to get access to behind-the-scenes production of many traditional Greek meals and eat like a real Athenian for a day, then don’t wait but book the food tour in Athens that will satisfy all of your preferences – Athens Food and Culture 4 hour Tour.


Regardless of moussaka being popular among many countries in the Mediterranean, the Greek moussaka is something special. This traditional oven-baked dish, present in all significant family gatherings, includes layers of minced meat on the bottom, flavorful mixture of eggplant and potatoes covered with creamy bechamel sauce on top. Some go a step further and suffuse this irresistible Greek meal with cinnamon or allspice. You should know that since there are many different variations of moussaka, it might be possible to come across a different recipe in two restaurants close to each other. However, being one of the most famous meals in Greece, you should not think twice about putting it on your Athens food list.

One thing is certain, and that is that vegans and vegetarians should not miss the opportunity to enjoy authentic Athenian food. Besides many Greek salads made from fresh vegetables, you should certainly try briam. Briam is a traditional dish made from all kinds of vegetables including eggplant, carrots, zucchini, potatoes, peppers and more all baked in extravagant tomato sauce. This Greek food is regarded as one of the best traditional summer courses as it is pretty light and uses mainly seasonal vegetables.


If you are a fan of seafood, then you will not be able to resist this incredible flavor-packed Greek recipe. The freshly caught shrimps are cooked  and nestled in spiced tomato sauce, chunks of feta and, of course, some natural spices. Make sure you have pita or bread to soak up the plentiful rich sauce and clean up your plates. Yum!

Octopus hanging on the sun near the shore to dry out. Vegetarian or not, this image will increase your desire to understand why the octopus is on the top of the list of the best foods in Athens. Grilled or marinated, this fish will make an excellent appetizer or main course. Depending on where you decide to sit, this specialty can be served with some traditional wine, balsamic vinegar or fresh oregano or on its own. Trust us, in any case, it’s going to be a slice of heaven on your plate.

One Greek dish that we all miss back at home is the great “gyro”. However, when you are in Athens, be careful to order souvlaki or pita souvlaki since that is the way locals refer to it. Souvlaki is made of little pieces of meat (chicken or pork), often with the addition of vegetables, grilled on a skewer. To make the meat even more mouth-watering flavor it with tzatziki or other traditional Greek salad. Also, it can be found in almost every traditional taverns or street-side restaurants. Oh, and yes, don’t forget to add a bit of lemon on top and make a real party of flavors in your mouth.

You want to find out more about the Athens food scene or learn more secrets about food in Athens? Then you should definitely consider joining our special food tour in Athens! Roam around the city, nibble incomparable Greek foods from plates and realize why Athens is true gastronomic heaven in this Athens Food Tour.


Is there a better way to start a day in Athens than with mesmerizing bites of sweet bougatsa and a sip of traditional Greek coffee? Bougatsa is sweet pie made with custard cream encased with golden-brownish phyllo crust sprinkled with cinnamon and powdered sugar. Doesn’t it sound inviting? If you like street food, and you liked your sweet breakfast, you will be able to find freshly baked bougatsa everywhere at any time of the day, even late at night. To make this delicious snack even more special you should know that bougatsa can be found with various salty ingredients such as cheese, spinach or minced meat.

And vegans, you probably will not find vegan bougatsa, but we have a special breakfast treat for you! If you prefer to start your day actively by meditating facing the ancient Acropolis, and then have the most amazing vegan brunch, don’t second-think participating in our Ancient Greek Meditation and Vegan Brunch. A unique food tour in Athens that will give you the best of both worlds: getting in touch with your spiritual side and spoiling your inner foodie with the best vegan food in Athens!

No need for dessert – said no one ever. If you need something to satisfy your sweet cravings after a long day of wandering through Greek capital, then loukoumades are the right choice for you. Loukoumades are Greek donuts soaked in honey or various syrups sprinkled with walnuts and cinnamon. When you taste their crispy crusts and fluffy dough inside, you will understand why loukoumades are the top choices of sweet foods in Athens. Also,who said that sweets and alcohol don’t match? Try these golden puffs with a glass of Greek ouzo and make your taste buds dance.

Who is hungry now? We promise that you will not regret trying any of the mentioned dishes during your stay in Athens. The Athens food scene is awaiting for you to be discovered while you indulge in mouth-watering meals and learn about Greek culture one bite at a time. Time to make some delicious memories! Oh, we almost forgot! In case that you are traveling to some other destinations in Greece, like Santorini, Crete or Mykonos, don’t miss our equally insightful foodie guides that are linked above! Kali oreksi!