Homepage Greek Food 10 Greek Foods You Must Try in Mykonos

Although known for its impressive beaches and infamous nightlife, Mykonos is just the place to try traditional Greek dishes and enjoy a Cycladic culinary experience. From upscale and internationally acclaimed restaurants, to street food and traditional bakeries, Mykonos has something for everyone. If you’re looking for where to eat in Mykonos, you can find restaurants both traditional and international in Mykonos Town as well as at most beach bars on the island. To experience traditional Mykonian cuisine make sure to visit some of the other villages on the island such as Ano Mera, Ornos Mykonos and Tourlos where you can find many taverns to choose from. If you’re looking to try the island’s local delicacies than continue reading to find out the top 10 Greek foods you must try in Mykonos!

1. Greek food you must try in Mykonos ->Kopanisti

Starting off our list of the best foods to try in Mykonos is Kopanisti. This Mykonian cheese is famous for its spicy, aromatic taste and goes great with mezedes (tapas) or Greek wine. This soft cheese goes through a unique maturing process that lasts two months, during which fungus grows. The end result is a cheese, rich in flavor, texture and aroma. Pair it with some tomatoes, bread and a glass of wine and you’re ready to start your meal!

2. Greek food you must try in Mykonos -> Ksinotiri

Why settle for one type of cheese, when Mykonos has got two! Other than the famous feta, Greece is home to hundreds of cheeses and Mykonos does not fall behind. Ksinotiri is a sharp and sour cheese best accompanied with tomato, pasta or bread. This sour cheese is made by fermenting and straining buttermilk. The key to ksinotiri’s strong taste is to leave it out in the sun for it to firm. This aromatic and sharp cheese is an excellent choice to add to your list of the best Greek foods to try in Mykonos.

3. Greek food you must try in Mykonos -> Louza

A specialty of Mykonos, Louza, consists of thin slices of spiced and cooked pork. This traditional dish of Mykonos is first dried out under the sun in the early wintertime, before they marinate it with salt, pepper and other spices. Once matured, louza can be stored in the freezer until the summer without losing its freshness. It is usually served in thin, dark slices. This aromatic dish became a sought-after dish in the last decade of the 20th century where gastro journalists and the public discovered it. Ever since its discover, tourists visit Mykonos every year seeking out to try this rare island delicacy. Interested in joining a food tour in Mykonos to get a hands-on experience with the local ingredients such as louza? Join the Mykonos cooking class to learn family recipes to some of the islands most famous dishes.

4. Greek food you must try in Mykonos -> Amygdalota

Mykonos’ famous windmills may be exactly what your Instagram feed is missing, but once upon a time, they would ground the barley into flour, boosting the local economy. Nowadays, flour may be imported from mainland Greece, but certain island traditions such as baking traditional almond cookies, amygdalota, still thrive today. Similar to a marzipan, amygdalota consists of ground almonds, sugar, and flavored with rose, or orange blossom scented water, and topped of with powdered sugar. Every island of Greece has its own recipe to making amygdalota, so make sure to try these sweet cookies when in Mykonos.

5. Greek food you must try in Mykonos -> Soumada

Yes, there are non-alcoholic drinks on Mykonos that you must try and are part of our Mykonos food guide, and one of them is called soumada. Soumada is an almond and rosewater flavored drink that can be found almost everywhere on the island. This sweet drink consists of just almonds, sugar and rose water or orange blossom water. This refreshing non-alcoholic drink is a local’s favorite as it is the perfect refreshment on a hot summer afternoon.

6. Greek food you must try in Mykonos -> Mostra 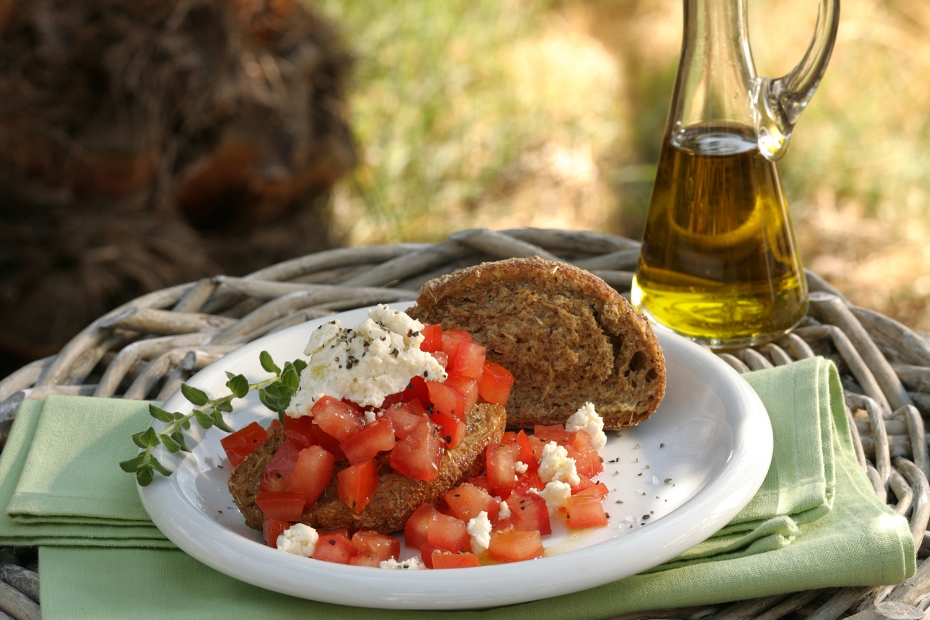 Another traditional Greek food that you must try in Mykonos is mostra. This simple appetizer consists of rusk, kopanisti, one large tomato, olive oil, oregano, capers and olives. Similar to the Cretan dakos, mostra is the perfect entry starter. The spicy taste of the kopanisti coupled with the juice and sweet flavor of the tomato is a refreshing combination. Order a mostra, a glass of ouzo, and a couple other mezedes and you dining like a true local before you know it. Join a food tour in Mykonos such as the traditional lunch at a local’s residence to learn how Greek dishes can be paired together to create a mouthwatering meal.

7. Greek food you must try in Mykonos -> Kalathaki (almond cake)

Continuing our list of the best Greek foods you must try in Mykonos is kalathaki, a traditional almond cake. Almond sweets and marzipans can be found throughout the Aegean as the islands were once dry, and produce was difficult to cultivate, so simple desserts made out of flower, butter, eggs, almonds and cinnamon were invented. Although kalathaki consists of just a few, simple ingredients, their rich and aromatic flavors make up for it. Find kalathaki sweets in bakeries all over Mykonos.

8. Greek food you must try in Mykonos -> Sausage

Another traditional delicacy of Mykonos is their sausage. So if you looking for what to eat in Mykonos, be sure to include Mykonian sausage on the list! This specialty is made from pork and has little to no fat. To bring out the rich flavor of the meat, cooks will season it with salt, pepper and oregano and are then left out to dry. The sausages of Mykonos have a higher content of lean meat and less fat, making it the perfect entry for a Mykonian dining experience.

9. Greek food you must try in Mykonos -> Melopita (honey pie)

Continuing our food guide to Mykonos is Melopita. Skip the cheesecakes and brownies when picking your dessert and opt in for a mouthwatering melopita or honey pie in Mykonos. The main ingredients of this pie is tyrovolia or mizithra cheese and local honey. This authentic Mykonian dessert can be found everyone on the island and is the perfect sweet after a savory meal. Most pastry shops and bakeries also produce them. Whether you are wandering the streets of Mykonos Town or indulging in a five-course meal at one of the top restaurants, be sure to try the islands famous honey pie.

Finally, we couldn’t end our food guide with the 10 Greek foods you must try in Mykonos, without mentioning the exquisite wine found on the island. Indeed, Mykonos’ Mediterranean climate, which consists of long, dry summers and short, mild winters, calls for the perfect environment to produce top-notch wine. The food in Mykonos creates the perfect gastronomic environment for foodies out there, but the wine in Mykonos will excite even the slightest of wine lover. If you like to get to know a destination through their wine than wine tasting in Mykonos experience is just the choice for you!