Acropolis of Athens and Parthenon: Complete Travel Guide of Athens Acropolis & the Parthenon

Acropolis of Athens and Parthenon: Complete Travel Guide of Athens Acropolis & the Parthenon

Are you ready to learn everything there is to know about the Acropolis of Athens and the Parthenon, from history to useful tips for visiting the main landmark and jewel of Athens? Acropolis of Athens and Parthenon travel guide will lead you through a unique story of iconic grandeur whose imposing beauty leaves everyone who lays their eyes on it stunned, so make sure to put it at the very first place on your Athens bucket list!

What does the word ‘Acropolis’ mean?

The definition of the word ‘Acropolis’ is a citadel or a fortified area at the top of an ancient Greek city. The word derives from the word ‘Akro’, edge or extremity and the word ‘Polis’, city, referring as it was aforementioned, to an ancient site built above the city, usually on a hill. Many Greek cities have their own Acropoleis, like Argos, Thebes, and Corinth. These high points of the cities used to be the center of social and economic life. Furthermore, they constituted a place of safety for the inhabitants, in periods of invasion. Apparently, the Athenian Acropolis is the most famous among all the ‘high cities’ in the world.

A brief history of Acropolis of Athens and Parthenon

There is evidence that the first inhabitants reached the hill of Acropolis in the fourth millennium BC. However, it was the statesman Pericles, who initiated the construction program of the most prominent ancient buildings of Acropolis, in the fifth century BC. The construction project, which took 50 years to complete, was led by the architects Ictinus and Callicrates, always, according to the plans and instructions of Pheidias.

The most imposing building among the Periclean monuments of the Acropolis is, by common consent, the temple of Athena Parthenos (Athena the Virgin), well known as Parthenon. The Parthenon temple is an ultimately enduring symbol of Ancient Greece, Athenian Democracy and Western civilization. Its construction began in 447 BC and finished in 438 BC. It is considered to be the apogee of the Doric order.  Athenians dedicated this great cultural monument to goddess Athena, the protectress of the Athenian citadel.

Insiders’ tip: Take a close look at the Parthenon architecture. Are you seeing anything strange? The architecture creates the impression that the Parthenon floats some centimeters above the ground. This happens due to the fact that the temple doesn’t have any single straight line right angles. Unbelievable? The Doric columns protrude in the middle and lean inward in two directions.  That’s why the Parthenon is simply perfect! One could say that the Parthenon touches perfection!

How to get to the Acropolis of Athens and Parthenon?

There are two entrances to insert the Acropolis monumental complex. The first entrance which also the main entrance and usually overcrowded is located in the west, while the other one, the side entrance is located in the southeast. Which is the best option for your Acropolis tour? It’s up to you! The first one is located near the parking area of Acropolis. On the other hand, choosing the side entrance of the south slope of Acropolis means that you hike through Dionysus Sanctuary and visit the Dionysus Theater. Both entrances require some climbing.

You can get to the Acropolis on a metro, using the Green line to “Monastiraki” Station, or “Thissio” Station. In this way, you hike through Plaka and Anafiotika, two of the most picturesque neighborhoods of Athens city center. From the Thissio Metro Station, you will get to Acropolis, passing by the archaeological site of Ancient Agora.

Alternatively, you can take the red line and get off at “Acropolis” Metro Station, which is the closest station to the ticket kiosk. From that point, you can reach the south entrance, walking through the pedestrian walkway of Dionysiou Areopagitou.

How to get to the Acropolis of Athens from Piraeus port?

If you are reaching Athens by a cruise ship and want to visit Acropolis, you can take the X80 express bus line, which operates only during the summer season. This bus stops at the Acropolis museum. Alternatively, you can get the green line of the metro towards the city center, get off at Thissio or Monastiraki station, and walk up to the Acropolis. Otherwise, take the metro all the way to Akropoli station. You have to transfer from the green line to the red one at the “Omonoia” metro station.

What are the Visiting Hours and Ticket prices of Acropolis in Athens?

How much cost the entrance tickets to the Acropolis of Athens?

The single-use ticket price for a  visit to Acropolis hill is €20.00 for adults, while the same type of ticket costs €10.00 during the winter period. There is also a special ticket package that costs €30.00 (reduced to €15.00 during the winter period), valid for 5 days from the first entrance. This combined sightseeing ticket option gives additional to Acropolis, access to the following archaeological sites: Ancient Agora, Roman Agora, Hadrian’s Library, Olympieion, Kerameikos, Aristotle’s School (Lykeion). Always check the official website for Acropolis ticket prices.

Insiders’ tip: In order to avoid wasting time in the queue for buying an entrance ticket to Acropolis, it is more convenient to buy your ticket online. The best choice to visit the Acropolis is to join a tour of the Acropolis and Athens or spend a day full of sightseeing on Private Athens Highlights Tour. If you prefer to explore the most important landmarks of Athens: Acropolis and the Parthenon, on a private mode, there is no better option than a Private Acropolis Guided Tour.

What else to see when visiting the Acropolis of Athens? 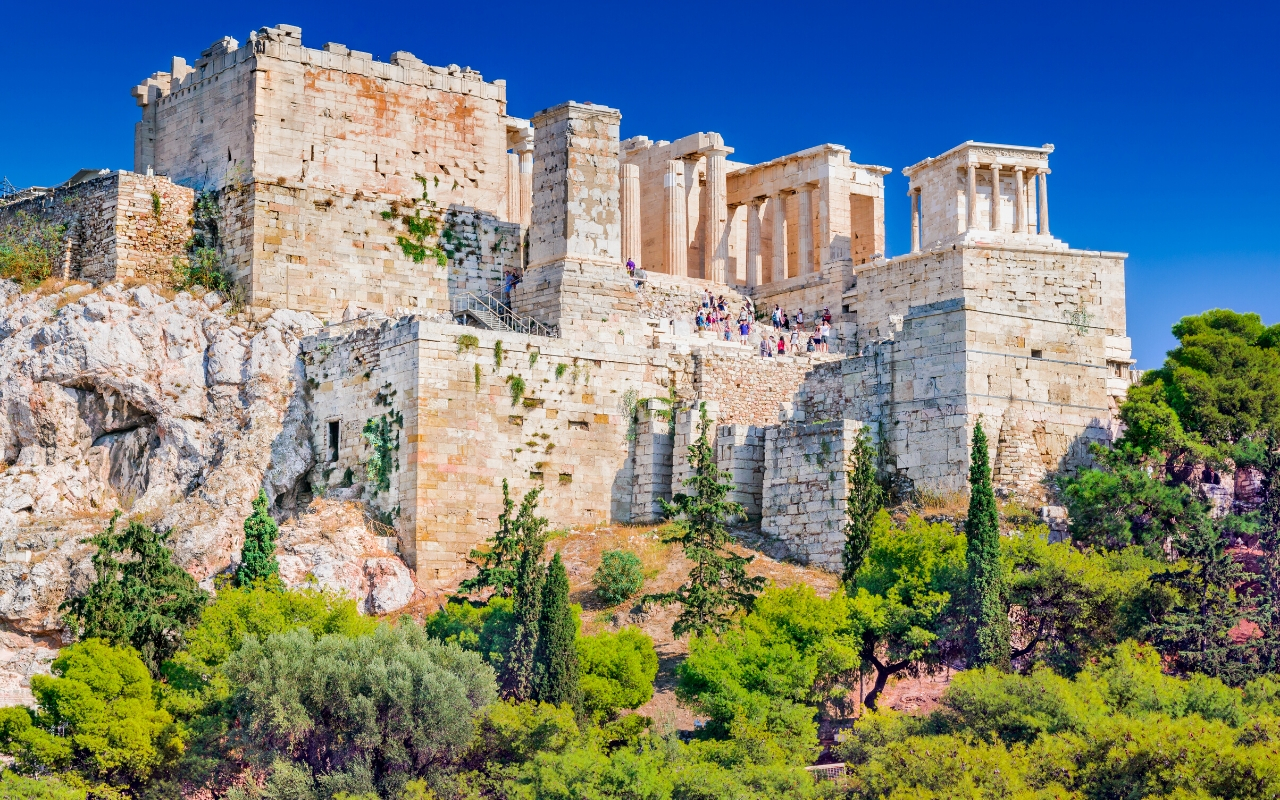 A Greek temple located on the north side of the Acropolis. It is said that the temple was built in honor of the Greek hero Erichthonius, or the Athenian king Erechtheus. The wonderful temple is sustained by six caryatides, female, physical structures that serve as columns.  The temple of Erechtheion was dedicated to both goddess Athena and god Poseidon.

A small Greek temple to the right of the Propylaia. It was built around 420 BC, and it’s the first fully Ionic temple of the Acropolis. The temple was dedicated to the goddess Athena, who was also called with the epithet “Nike”, victory in Greek, as a goddess of warfare and victory.

The Theater of Dionysus is located beneath the Acropolis on the southwest side of the hill. The Theater of Dionysus is considered to be the first theatre in the world, dedicated to Dionysus, the god of wine and drama. It was actually the place where Greek tragedy was born and also where the most important ancient theatrical celebration of Athens, the Dionysia used to take place.

The Odeon of Herodes Atticus is a stone open-air theatre, located on the southwest slope of the Acropolis. It was built between 160AD – 174AD by Athenian Herodes Atticus in remembrance of his wife, Rigilla.

Insiders’ tip: If you gonna visit Athens from May to October, don’t miss out to attend a performance at the Odeon, in the framework of the Athens & Epidaurus Festival. You will experience a dreamy night under the starry sky of Athens, that you are unlike to forget.

Just next to the Acropolis Metro Station, on Dionysiou Areopagitou Street, the new Acropolis Museum is located. In this state-of-the-art building, you can see some important sculptures and other original artifacts, found in the Acropolis. There is also a pretty cafe-restaurant on the terrace of the museum, that offers a stunning view over Athens city.

Interesting facts about the Acropolis of Athens and Parthenon

Here are the most significant, useful things you need to know about the Acropolis of Athens and the Parthenon, that will help you to impress your fellow visitors to Acropolis!

Useful tips for visiting the Acropolis of Athens and Parthenon

1.  What is the best time to visit the Acropolis?

The earlier you visit Acropolis and Parthenon, the better experience you will have. Try to be in the line for purchasing tickets before 08:00 in the morning, to avoid the huge groups of people arriving at Acropolis, especially those from cruise ships. Another choice, in order to avoid the crowds, is to visit the Acropolis after 17:00 in the afternoon. In this way, you will have the opportunity to enjoy the breathtaking view of Athens city during the sunset.

Due to the aforementioned tip for visiting Acropolis, it is better to avoid going to Acropolis when the weather is extremely hot since there is no shade to protect yourself from the warmth of the sun’s rays. On the other hand, when it rains, the stones can become very slippery.

Insiders’ tip: Plan your visit to the Acropolis on Sunday and be there by 08:00 am or leave at 08:00 pm. In this way, you will have the opportunity to watch the Greek Presidential Guard -Evzones, raising the Greek flag in the morning and lowering it at sunset.

2.  What to wear when visiting the Acropolis of Athens?

The best advice we can give to anyone visiting the Acropolis is the following: Choose the appropriate shoes!
Walking on marble can turn to be a painful experience. The hill is slippery and the stones can be very steep at some points. In general, the ground is uneven, thus, you should be very careful while hiking to the top and strolling around the historical monuments on the top of Acropolis. Make sure that your sneakers have good traction. In any case, avoid sandals or flippers.

In July or in August, the temperature in Athens can reach as high as 40 degrees. So, can you imagine how hot can the Acropolis get during the summer? Wear light clothes, sunglasses, and a hat to protect yourself from the sunlight.

3. What to bring with you when visiting the Acropolis of Athens?

The most important thing you should take with you visiting the Acropolis is a bottle of water. It’s certain, that even if there is no need to be in great shape to climb up to Acropolis, by the time you reach the top, you will get thirsty. Water is the only thing that will quench your thirst. The fact is that there are water fountains at the top of the Acropolis. Nevertheless, we recommend you take your own water bottle, in case you don’t prefer drinking tap water.

Sun cream is always necessary, especially in the case you are not accustomed to strong sunlight. As it was said before, there are no shady places to rest at the top of the Acropolis. Therefore, during your visit to the Acropolis, you are exposed to sunlight. We imagine you wouldn’t like to suffer from sunburn during your vacation time in Greece, would you?

Insiders’ tip: It’s impossible to visit Acropolis at night. Nevertheless, you can take marvelous pictures of the illuminated Acropolis, during the night. The best spot to take the most instagramable pictures of Acropolis is the Aeropagus Hill, in the northwest of the Acropolis. Is there a better way to enjoy a warm summer night than staring at the lights of the city with a bottle of beer in your hands? YES, there is! Join an Athens by night tour and immerse yourself in the nightlife of Athens.

If you have any extra tips, you would like to add, feel free to leave a comment below!  We would love to share them with all the Grekaddicts!