How to get around in Athens Greece

Homepage Athens How to get around in Athens Greece

How to get around in Athens Greece

How to get around in Athens

Athens is the capital of Greece and a city with a rich history. Therefore, for a visitor of Athens there is a big variety of things to do, no matter if he is staying for one night or more. The best way of getting around in Athens is on foot since most archaeological sites and monuments are located in the city center and within a small distance to walk from one to another. The best option is to start your walking tour from Syntagma Square and head towards Monastiraki, Plaka, and Anafiotika.

However, if you want to explore deeper the city and get to other attractions, or visit off the beaten sites, bear in mind that the Athens Transportation Network, (consisting of the metro, suburban railway, buses, trolley-buses, and taxis) is relatively affordable and really convenient to use.

Lately, the Athens transportation system has been significantly improved by replacing old paper tickets with modern electronic tickets. Now, there are 3 new types of tickets:

As a traveler to Athens, the best choice would be the Ath.ena reloadable Ticket or the anonymous Ath.ena Card mainly used for short-time periods. If you are just visiting, a Multiple ATH.ENA Ticket suits you best. The Ath.ena Ticket can be bought at any Urban Rail Transport and the Road Transport ticket counters as well as Automatic Ticket Vending Machines, whereas the personalized card need to be bought at special metro stations such as Syntagma or Monastiraki Metro Station. These tickets and cards can be used to get around in Athens by the users of all the Athens Urban Transport Organization (OASA) except for taxis. To get all the necessary information about issuing the transportation tickets and cards, visit the official Athens Transport website.

What tourist ticket to buy in Athens?

The best ticket product for travellers who arrive by plane is the 3-day tourist ticket that costs €20.00 and includes also a 2-way airport transfer fare valid for all airport transport lines, i.e. Athens Metro and Airport express bus lines.

Insider’s Tip: Renting a car in Athens may not be a good choice for getting around in Athens since there is heavy traffic on the roads almost all day, parking options are limited and during the pick times driving can turn out to be an overwhelming experience.

How to get around in Athens by Metro

The fact that Athens’ metro consists of only three lines makes it really easy to get around and self navigate. The metro lines run from 05:30 to 00:30, and every Friday and Saturday night lines 2 & 3 run until 02:30.

The first line or Green line (Electric Railway) connects the Piraeus port and the northern suburb, Kifissia, passing by the central stations of Monastiraki and Thissio. Hop on this metro line if you want to go to the Stadium of Peace and Friendship (SEF) with direction to Piraeus port or to the National Archaeological Museum and Olympic Athletic Center with direction to Kifissia.

The second Metro line or Red Line connects Anthoupoli and Elliniko, near the Sardonic Gulf, passing by the Syntagma station, the most central metro station that works also as a museum. Travelers can stop here and to visit the Hellenic Parliament and the Benaki Museum.

The third line or Blue line connects the western suburb, Agia Marina, and the Athens International airport passing by the city center. Hop on this metro line if you want to visit Athens Concert Hall, National Theatre, walk in Plaka or get to the Larissa Station (the main railway station in Athens).

How to get to Acropolis from Syntagma Station?

If you want to visit the Acropolis and Parthenon, the best route is to take the red line and get off at “Acropolis Metro Station”. Acropolis will be within 3’ walking distance.

Insider’s Tip: Make sure to stop also at Syntagma station and take a look at the archaeological artefacts and antiques before or after boarding on the train.

How to get around in Athens by Suburban Railway 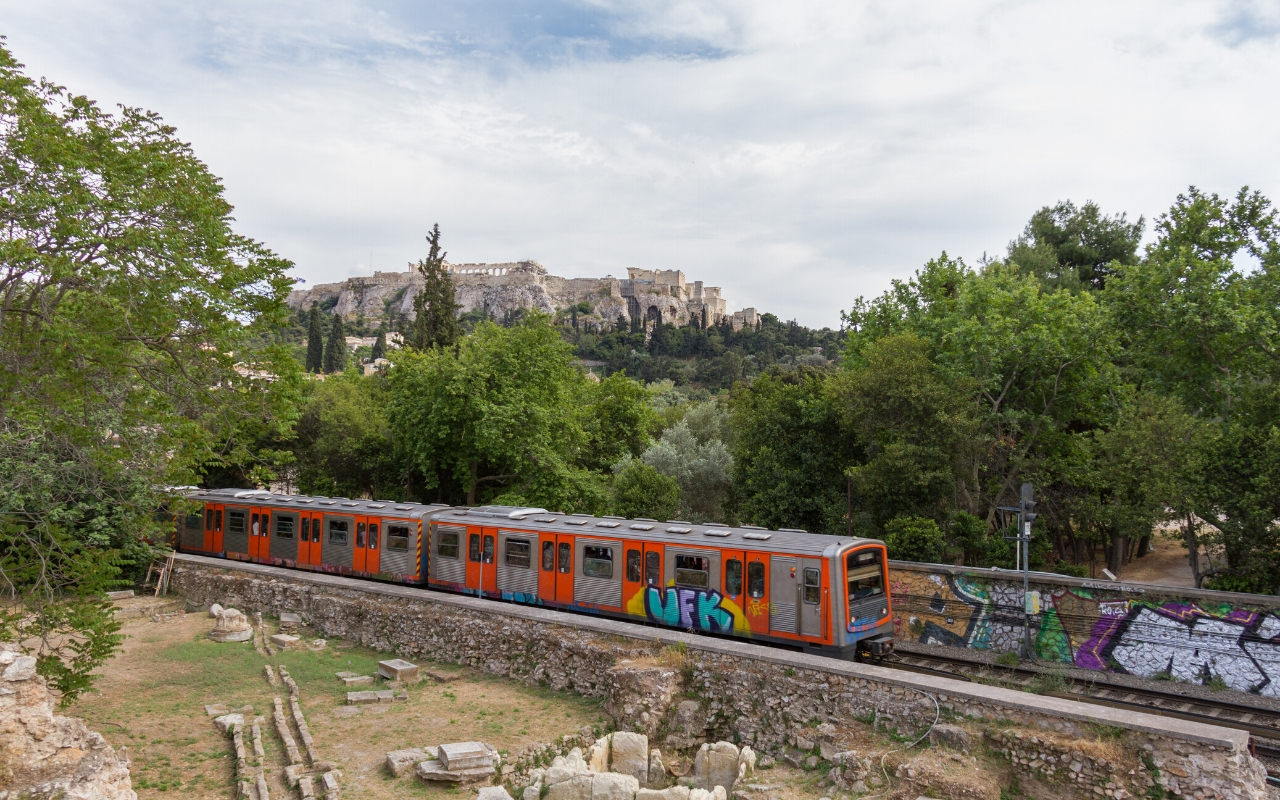 The Suburban Railway (Proastiakos) connects Attica and the wider area, including major cities such as Kiato and Chalkida, with the capital’s center, the port of Piraeus and the Athens International Airport “Eleftherios Venizelos”. As it is shown on the map below there are currently three suburban railway routes:

How to get around in Athens by Bus

The buses and the trolley-buses of Athens connect various areas of the city and its suburbs and are an easy and cheap way to get around in Athens. Operating hours vary according to line/day/season. In general, they run from 05:00 to midnight. There are also five 24-hour lines, 4 airport lines, and 8 Express lines. You can see all the timetables, maps, and real-time information about any bus line on the official website.

Insider’s Tip: Buses are usually overcrowded and the network can be a bit confusing. Make sure you know in advance your journey plan.

How to get around in Athens by Tram

The tram network system in Athens consists of three lines and serves to connect the city center with the coastline. You can use tram if you want to visit the city’s nearby beaches or the Temple of Olympian Zeus. The Line 1(red) “Syntagma – SEF” connects the Syntagma Square with Piraeus port. The Line 2 (green) “Syntagma – Voula” runs between Syntagma Square and the Voula district while the Line 3 (blue) “Voula – SEF” connects Piraeus port with Voula district running along the coastline. Trams run from 05:30 to 01:00. On weekends the last trams depart from Syntagma Square at 02:15. You can see all the timetables, routes and journey information on the following link.

Insider’s Tip: Don’t forget to validate your ticket when you get on any means of transportation.

How to get around in Athens on a Taxi

Taxis (yellow in Athens) are apparently the most convenient, but at the same time, the most expensive way of transportation. However, taxis are cheaper in comparison with other European cities. They operate a 24-hour service and you can pick up one on the street or otherwise at taxi stands around main touristic spots such as Monastiraki and Syntagma. In any case, you can reserve one in advance. The minimum fare is €3.44 and after that, the route is charged with a meter. (€0.74/Km and double from midnight to 05:00).

Insider’s Tip: Make sure that the taximeter is on and the tariff 1 indication is shown at the daytime. It is a norm for the taxi driver not to give a receipt, but it is your right to ask for it.

Download the app “Beat”, it is the Greek “Uber”.  “Beat” is a decent app that hand picks taxi drivers and guarantees the quality of the ride. Before you order a cab, it shows you the estimated time and rate for the ride, as well as the driver’s rating. Unfortunately, “Beat” is operating only in Athens for the time being, not the rest of Greece.