Loaded with historical importance and scenery of unequivocal beauty, Naxos is an island you cannot afford to miss, hence we present you with Naxos island travel guide that will help you uncover the magnificence of this enchanting destination.

According to Ancient Greek mythology, Ariadne, the Cretan Princess, who had ran away with Theseus after helping him kill the Minotaur and escape the Labyrinth was abducted by Dionysos, God of wine, in Naxos, the largest of the Cycladic islands.

The island has been continuously inhabited since the Neolithic era, and it was considered the most prosperous state in antiquity. It was under Venetian and Genoese occupation after the Fourth Crusade and Ottoman occupation between 1566-1821. Fragments of mythology intertwined with pieces of the later history of the island are evident on every turn. Venetian castles and mansions, Byzantine churches that harmoniously coexist and adorn the rugged Cycladic landscape of Naxos island, promise an intriguing experience for all willing to explore it.

How to get to Naxos Island

List of all things to do in Naxos is very long, but before we start exploring this enthralling island, let’s talk about the best ways to reach Naxos. The easiest way to get there is to fly to Mykonos and catch a ferry to Naxos. If you are flying to Athens, you may get a connecting flight to Mykonos or board the ferry in Piraeus Port, though this may be a longer journey. There are ferry connections to all neighboring islands as well, so if you want to have all the information about ferry schedules and online tickets in one place, visit the website FerryHopper.com. Now that we have transportation covered, it is time to continue our Naxos island travel guide!

It is time to meet the hidden gem of the Cyclades, whose beauty remained untouched by mass tourism. The best way to get an authentic taste of Naxos is with a walk in the Old Town, Chora, preferably in the late afternoon. Chora is an inhabited, lively, typical white cubes Greek village at the feet of the Kastro, the area at the highest point of the town, which is predominantly occupied by the 13th century Venetian castle. Signs on the ground will lead you to one of the three entrances, but if you want to avoid climbing, there is a lift for your convenience.

Naxos island travel guide could not go without the walk through the Castle, inside whose walls you will be walking and stumbling upon historical monument after monument: the Ursulines Boarding School, the Jesuits School of Commerce building, the Kapela Kazatza, the Duke’s Chapel, the Catholic Cathedral and the Tower of Krispi. If you find yourself feeling peckish as you are coming back down to the Old town, stop at the Old Market in Bourgos, which is packed with adorable shops and restaurants, and dine in this picturesque setting.

Taken to the sea in the morning, Naxos is rumored to have the best beaches in Greece, so choose the ones that match your preferences and include them on your things to do in Naxos wishlist.

For a genuine Greek spirit, make sure to explore the picturesque villages that populate the Naxos island during your time here. Some of these destinations make for a perfect hiking route, which is another reason why trips to the villages are among the top things to do while being in Naxos.

Tick off best things to do in Naxos

With its rich ancient past and influences of Venetian and Byzantine cultures, the island of Naxos breathes out the history and has a plethora of ancient sites.

Portara, the enormous portal that greets you approaching the island by sea, is all the remains from the Temple of Delian Apollo on an islet at the north of town, now connected to the mainland by a bridging structure. Walk there at dusk for a breathtaking panorama of Aegean sunset and great photo opportunities.

Located in central Naxos, the Temple of Demeter originally constructed in 530 BC, is one of the few ancient monuments where over 50% of the original pieces have been recovered. Comprising two monumental portals similar to the one in Naxos town, early Ionic style features, optically optimized elements, it is a site you cannot afford to miss. Yria, in Livadi, a sanctuary of Dionysos, God of wine is another must-see, as are the Kouroi of Melanes and Flerios. Abandoned, unfinished and grandiose at 6 meters and 10 meters respectively, these two archaic statues probably depict God Apollo and were likely discarded due to potential damage during transport of some sort of defect in the otherwise superb Naxos marble.

If you decide to travel in time to the oldest days of the island and acknowledge its historical path, don’t skip tours to the best museums in Naxos. Housed in a 5-storey 17th-century Venetian building, the Archaeological Museum located in Kastro, a historical monument itself, demands your attention. Housing exhibits from the Neolithic to the Bronze Age, the Archaic, Classical, Roman and Hellenistic era, this museum is among the best things to do in Naxos and an absolute must-see for true history admirers.

Another treasure to discover in the vicinity is Domus Venetian Museum, the ancestral heritage of the Della Rocca family, housed in the only remaining Venetian tower out of the seven originally build in the 1200s. You will follow Mr. Della Rocca through the castle and end up in the vault where you will have the opportunity to see original paintings, sculptures, ceramics, photographs and jewelry from the time of the Venetian rule and enjoy a glass of wine while admiring pieces of art.

While you’re still in town, pop in the Museum of Naxos Ancient Town (also known as Mitropolis Museum). It is an open-air museum located below street level, next to the Zoodochos Pigi Church, right at the town square. You will walk on suspended bridges floating over the archaeological site of Grota, and look at the remains of the ancient city Naxos Town is built upon. You may continue your journey to antiquity in the Archaeological Museum in Apiranthos, which houses findings from excavations in the area. While in Apiranthos, don’t miss the Folk Art Museum, the modest in size but interesting Natural History Museum and the Geology Museum. Last but not least, visit the Eggares Olive Press Museum for an experience that links the past with the present and that will wrap up the historical background of the Naxos island.

Churches and Monasteries on Naxos Island

The island is recognized for having a vast number of picturesque churches and monasteries whose detour is one of the best things to do while being in Naxos. Visit Agia Monastery in the north of the island. Mostly destroyed by a great fire, this monastery made of Naxian stone combined with the amazing panoramic view to the Aegean standing at 200m above sea level is worth seeing.

Unavoidable item in Naxos island travel guide is the Fotodotis monastery, located north of Danakos Village is the oldest and most significant castle-monastery building in Naxos. Overlooking the neighboring valleys from a 500m altitude, this 9th-century monastery was built on the ruins of a 6th-century church and is one of the most photographed buildings in Naxos.

When it comes to churches, here’s the recommendation of the best ones on Naxos island:

Naxos cuisine is sophisticated and very diverse, and what kind of island travel guide would it be without mentioning local delicacies? As in most places in Greece, Naxos food is based on fresh produce. It goes without saying, fish and seafood dishes are the first you should sample: try sea bass soup, tuna, sea bass & salmon Ceviche, seafood pasta, mussels with peppers and herbs and octopus croquettes. Don’t miss out on the hearty meat dishes, though. Try Kalogeros, a beef aubergine and cheese dish, boiled goat, lemon rabbit, slow-cooked pork with garlic and wine casserole, pork with fennel, and Zamboni, a cured salted pork meat similar to prosciutto, all accompanied by the famous Naxos potatoes.

And how we could talk about Greek cuisine without mentioning cheese? Cheese is also big in Naxos, and one fun fact about it is that locals classify cheese as male or female, based on its taste and intensity. Spicy Naxos Graviera is one of the most renowned ‘male’ types of cheese along with Ksinomizithra, while Mitzithra is a sweeter, female one.

Traveling in the Naxos landscape, you will have noticed the repeating theme of the citrus trees, which is also echoed in the local cuisine. Don’t miss to try Melachrino, a type of syrupy cake made with walnuts and citrus, served with goat’s milk ice cream, citrus spoon sweets (preserves), and citrus liqueurs. Naxos being home to the god of wine Dionysos, had the reputation of having rivers of wine according to ancient poets. Find out the truth sampling local varieties such as Tranambelo, Moschato, Monemvasia, Savvatiano and Aidani.

Insider’s tip: Besides in restaurants, real foodies can discover charms of local cuisine in special food tours in Naxos! Peek behind the scene of a traditional Naxian bakery and learn everything about crafting delicious pastries. And, if you want to know everything about meal preparations and secret recipes, join a local family for a cooking class in their own home. These unique tours are an absolute must on the list of top things to do in Naxos! 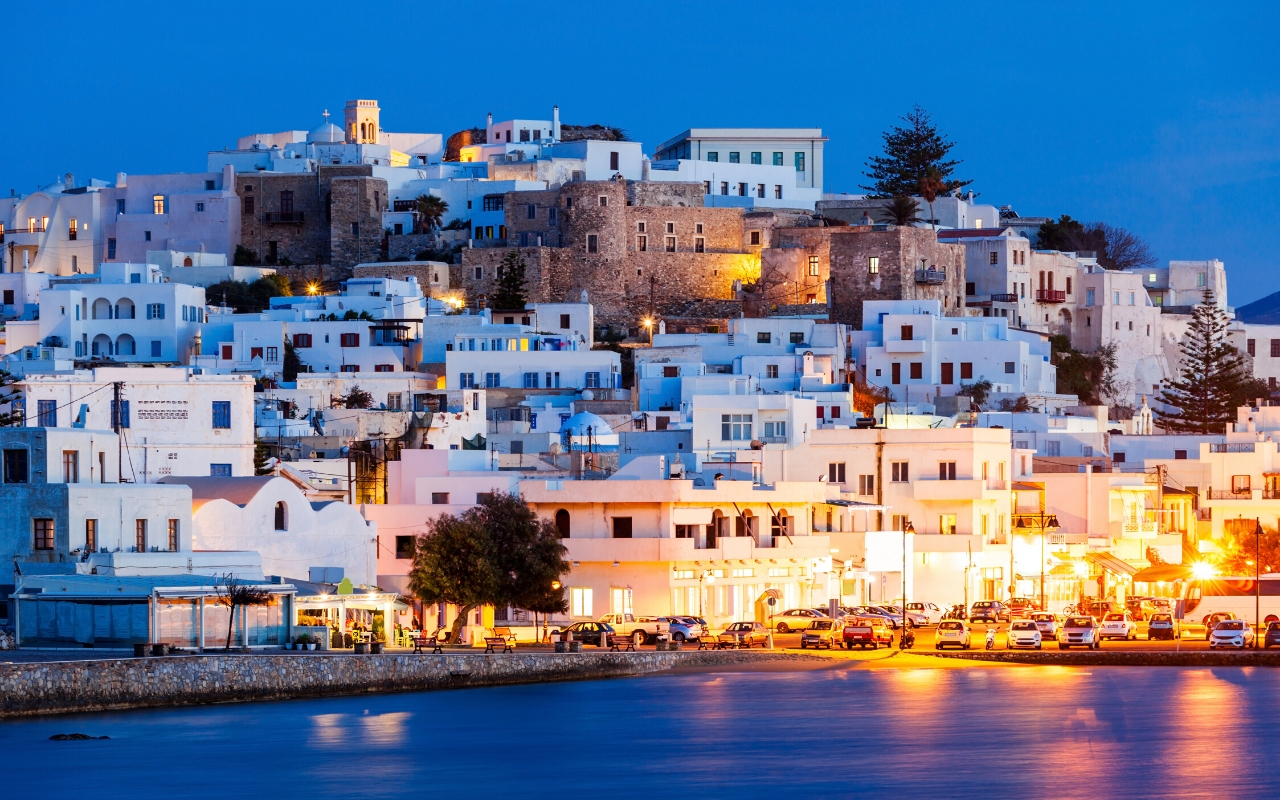 And for the end of Naxos island travel guide, we want to share with you some extra tips for traveling to Naxos island! In an array of interesting things to do in Naxos during the season, don’t miss the Domus Cultural festival that takes place in Naxos every June-October, including evening chamber concerts (classical to jazz 7 Greek music) or film screenings in the courtyard of the Della Rocca Barozzi Mansion in the Kastro district in Chora! However, spaces are limited so make sure to book in advance for the most atmospheric evening! Kalo taksidi!