Vegan Food Tour in Athens In a Nutshell

Indulge in the most delightful vegan food tour in Athens. Savor the tempting Greek meals while admiring the Acropolis and nourish your body and soul with an alternative Athens food tour.

Prepare for your vegan food tour in Athens with traditional starters in a family restaurant.

Time for some Greek salad and vegan Greek gyros - see what the fuss is all about.

Taste the mouth-watering Greek vegan food best sellers - moussaka or pastitsio - and finish off with some plant-based velvety ice cream.

The vegan food tour in Athens has come to its end. Let the wide array of flavors and emotions lead you through the rest of your stay.

What to Expect from Vegan Food Tour in Athens

Discover the best vegan spots in Athens, relish the traditional Greek delicacies, from fine aromatic cooked dishes to exquisite raw creations that compose an alternative vegan Athens food tour. Satisfy your savory side or your sweet tooth with flavorful Greek vegan food. Stroll along the adorable Plaka alleys, get acquainted with vegans from the group and observe the local lifestyle. Explore this eclectic city with the vegan food tour in Athens, its plethora of vegan food options, its vegan festivals possibly taking place on the day of the tour, as well as its cruelty-free side consisting of innovative businesses. Experience feelings of lusciousness and well-being at the same time.

Join this electric and eco-friendly tour of Athens for a one of a kind city tour! The e-TUK is a fun way to cross off some must-sees of ...
Photography Tours 1 hour

If you’re afraid you won’t manage to fit in the most important sites in Athens during your stay, then the Half-day Morning Walking Tour ...
Walking and Biking Tours 4 hours 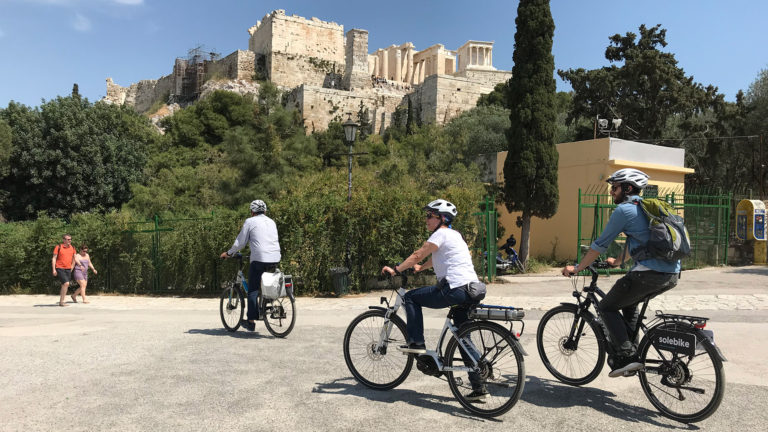 Discover the historical center of Athens on wheels. This exhilarating Athens Historical Center e-Bike Tour through the old side of ...
Walking and Biking Tours 3 hours
Book Now